“The Fear of the Lord is the Beginning of Wisdom, and Humility comes before honor” (Proverbs 15:33).

Many people misunderstand what wisdom is. Many people think of wisdom as something highly abstract or metaphorical. Wisdom is not abstract knowledge. Wisdom is the practical ability to face and overcome the daily problems of life. Wisdom is about making good decisions, avoiding evil or foolishness, working hard, saving money, caring for children and parents, living simply within one’s means, facing unfairness, suffering, and death, and not expecting too much of life. It means living in the present, learning from the past, and keeping an eye on the future. There are two words we must understand if we are to begin the quest for wisdom: We must understand what it means to fear the LORD God, and we must understand what it means to be humble.

The first of two words we need to think about is “Fear.“ Wisdom begins with recognizing that we are not God, and we must respect the One who is God, the Lord of the Heavens and the earth and the Creator of all things visible and invisible. Modern folks have a problem with the idea of “fearing God.” A better translation of the Hebrew in this context is something like “Deep Awe and Respect”. For example, I have always had a fear and respect for electricity. When I was a child, I got a pretty bad shock putting my hand in a socket. We want our children to be afraid of touching a hot iron, or a burner, or an electric socket because we have a deep respect for what can happen if they do not have a healthy understanding of what heat or electricity can do.

Years ago. one hot late July or early August day, I was part of a tie-gang repairing rail near a siding just outside of Black Rock, Arkansas. We were replacing worn out tie-plates with new plates and spikes. The foreman left us for a while, and we were working and goofing-off not watching where we were or where we were going. Normally trains knew where repair gang was, and the foreman had a radio to warn him when we needed to get off the rails. For some reason, the warning failed. I don’t know why.

In any case we were working along ahead of a curve when all of a sudden a freight train going full speed came out of what we thought was nowhere. You never saw a bunch of guys move so fast in all of your life! I was near the front of the group, and I will never forget hearing that horn, looking up, and seeing a train pulled by four engines going all out come straight at us around that bend. For a second, I was frozen with fear. Looking up and seeing that train on the rails that day was frightening because we knew what would happen if we did not get ourselves and our tools off the track and away from the danger of being hit by a moving object of such speed, weight and power.

God is like that train: we cannot move God, change God, or avoid God. God the source of all the power in the universe, and only a fool does not respect that power. Our only and best choice is to go with the power and wisdom of God; we cannot change it.

The second word we must understand is the word, “Humility.” Over and over, the Bible teaches us that humility is important. Wisdom literature and the New Testament tell us that, “God opposes the proud, but gives grace to the humble” (James 4:6; I Peter 5:5). Many people, including many Christians, have a bad feeling about the word “Humble.” That is too bad because humility is one of the most important virtues a person can have. Humility is remembering who and what we are.

The Latin word for “Humble” is the same word from which we get out word, “Humus”. Humus is basically dirt. Those who know the creation story of Genesis know that humans were made of the dust of the earth. The name “Adam” comes from a Hebrew word meaning “dust” or “dirt.” At graveside services, we say “Words of Committal,” which go something like this: “We commit our dear departed to the earth, ashes to ashes, dust to dust.” It is a reminder that we are all made of dust, and it is to dust we will all return. This recognizes our human condition.

Humility, then, is remembering who we really are: frail, fallible, bent, and sinning human creatures—all of us. We are not gods, and we cannot become gods. We are just men and women, creatures of the dust. We cannot see all ends, and we often do not know the consequences of what we are doing. We make terrible mistakes. We even make terrible mistakes when we are trying to do our best because we are as the hymn has it, “frail creatures of dust and feeble as frail.”

Humility is necessary for us to learn anything. Humility is a fundamental stance towards creation and others that admits that we do not know everything. We don’t even know enough to keep ourselves out of trouble without a bit of grace and good luck. The first thing we must learn before we can learn something new about anyone, including people we have known for years, is admit we don’t know everything and we need to know more. To be humble is to be teachable; and, if we are not teachable, we are proud and certainly going to get ourselves in trouble.

We know a lot about a lot of things in the modern world. However, I am afraid that our scientific success has made us proud and foolish. For example, we have thought as a nation that we know more than the ancients and God’s word about money, so we have borrowed our nation to the point of national ruin. We thought that we knew more than God and God’s word about sex and sexual relations, so now we live in moral wilderness in the midst of an epidemic of sexually transmitted diseases that grows daily in the face of all the drugs and all the penicillin and other drugs we throw at it. As Paul says in Romans, “Thinking ourselves wise, we have become fools” (Romans 1:22). In almost every area of life, the modern world is arrogant and foolish—and increasingly dark. I often say that wheh the history of the modern world is written, it will be called “The Age of Arrogance.”

There is no way of knowing for sure if our nation and culture will escape the spiritual and moral wilderness in which we find ourselves. One thing for sure, we will not succeed in sustaining our culture and society unless we learn and relearn the two basic principles of wisdom: A Deep Respect for the One who is the Creator and Sustainer of all things and the humility to understand that we are not gods and we cannot become gods. We are “frail creatures of dust and feeble as frail.”

In his letter to the Corinthians, Paul speaks of God’s “hidden wisdom.” Different cultures have different definitions of wisdom for practical purposes, but none of them can conceive of the hidden wisdom of the cross. Thus, Paul says in I Corinthians:

Jews demand signs and Greeks look for wisdom, but we preach Christ crucified: a stumbling block to Jews and foolishness to Gentiles,  but to those whom God has called, both Jews and Greeks, Christ the power of God and the wisdom of God. For the foolishness of God is wiser than human wisdom, and the weakness of God is stronger than human strength.  Brothers and sisters, think of what you were when you were called. Not many of you were wise by human standards; not many were influential; not many were of noble birth. But God chose the foolish things of the world to shame the wise; God chose the weak things of the world to shame the strong. God chose the lowly things of this world and the despised things—and the things that are not—to nullify the things that are,  so that no one may boast before him. It is because of him that you are in Christ Jesus, who has become for us wisdom from God—that is, our righteousness, holiness and redemption. Therefore, as it is written: “Let the one who boasts boast in the Lord (I Corinthians 1:22-31).

Both the Greek and Hebrew notions of what was rational and wise excluded God from saving the world through a great act of self-giving love. In both cases, the notion that an All Powerful, All Knowing God would condescend to be abused and crucified would never occur to them as being rational. Nevertheless, God chose to act in this completely unexpected way to save the world. In so doing, God revealed a wisdom–a wisdom of self-giving love–that the world would never have imagined possible.

The same thing is true in our day and time. Those who are wise and powerful increasingly feel that they may retain and use their power by any means that allows them to advance their agenda. This is true on the left and on the right. Increasingly, those in power and those seeking power believe they are entitled to do whatever it takes to advance their agenda, no matter who gets hurt, what happens to the poor or the middle class, whatever the impact is on families and local communities. Possessed of unbounded arrogance and pride, they follow an ideological agenda irrespective of human consequences. 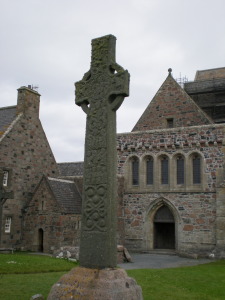 God has another way. His way is a way of self-emptying. His way is a way of humility. His way is personal in the extreme. This is why when He came to dwell among us he could say, “My kingdom is not of this world.” His kingdom comes into this world one person at a time. It cannot be brought in by law, by regulation, by executive order, by militia, or by armies. I can only be brought into the world by personal acts of self-giving love. This is why in Ephesians Paul could say, “For it is by grace you have been saved through faith, and this not your own doing; it is a gift of God, so that no one can boast” (Ephesians 2:8-9).

The way of arrogance and false pride is excluded by grace. If those in authority began to feel that their power, position, wealth, and influence were the result of grace, the unmerited favor of the One Who Is and Will Be, they would act from a different premise and in different ways than they do. The world would begin to be healed by humility, a sense of service, and self giving love. We know that this is true because, when God determined to institute his Kingdom, it is the path He chose.