For to us a child is born,
to us a son is given;
and the government shall be upon his shoulder,
and his name shall be called
Wonderful Counselor, Mighty God,
Everlasting Father, Prince of Peace.
Of the increase of his government and of peace
there will be no end,
on the throne of David and over his kingdom,
to establish it and to uphold it
with justice and with righteousness
from this time forth and forevermore.
The zeal of the Lord of hosts will do this (Isaiah 9:6-7).

The Project of these Blogs

This year I began a project that was planned some years ago when I decided that, when I retired from full-time ministry, I would begin a project to write my reflections on what is called, “Political Theology.” The book, if it is ever written, will be a pastor’s look at how Christians can best serve the secular state in which we live and a defense of religious liberty. The idea began long before Donald Trump was elected President (and especially before this difficult election year), but the Trump Presidency and this difficult past year seems to me to validate the underlying notion of the project: We must develop a politics founded on government by wisdom and the nurturing of a deep, communal relational reality. We must step away from the “Politics as War for Power” that dominates our political life in America. In order for our freedoms to survive, we must rebuild our national culture, of which politics is only a part.

The Hidden Wisdom of Christmas

Christ and the earliest Christians explained the meaning of the incarnation from the texts of the Old Testament, and especially from Isaiah. It was from Isaiah that Jesus and the Apostles taught:

The expectation of the Jews was for a Messiah that would give them a victory over their oppressors within their national history— Messiah who would be a great conqueror, hero and king. Instead, they received a crucified Messiah who ruled in weakness and powerlessness upon a cross, defeating the enemies of evil, division, and death in a way that no one could have imagined. This was the “foolishness of the Cross” of which Paul spoke to the Corinthians:

For the word of the cross is folly to those who are perishing, but to us who are being saved it is the power of God. For it is written,

“I will destroy the wisdom of the wise,
and the discernment of the discerning I will thwart.”

Where is the one who is wise? Where is the scribe? Where is the debater of this age? Has not God made foolish the wisdom of the world? For since, in the wisdom of God, the world did not know God through wisdom, it pleased God through the folly of what we preach to save those who believe. For Jews demand signs and Greeks seek wisdom, but we preach Christ crucified, a stumbling block to Jews and folly to Gentiles, but to those who are called, both Jews and Greeks, Christ the power of God and the wisdom of God. For the foolishness of God is wiser than men, and the weakness of God is stronger than men (I Corinthians 1:18-25).

Just as the earliest Christians and Jews had difficulty understanding how the Creator God of Wisdom and Might could rule from a Cross, so contemporary Christians have the same problem. We find the tactics of self-giving love hard to understand.

The Moral Energy of Christmas

One great need in contemporary American politics is for those on the left and right to recognize that there can be no perfect society inside of human history. We are finite, imperfect creatures incapable of accomplishing such a task even if it were possible, which it is not because of the nature of human growth and understanding. Furthermore, we are filled with endless hopes and dreams and are never satisfied with any accomplishment, however grand. All we can do is respond to the needs and issues of our own day and try to make things better within the limits of our place in history, avoiding the madness and violence that comes with every attempt to impose a perfect order of things upon others within history.

We can and should long for a “Wonderful Counselor” and “Prince of Peace,” whose shoulders are strong enough to bear the brokenness of the world and the hopes and dreams of a finite and flawed human race, but we should not delude ourselves that such a person can appear within the history of any secular, human society. He came once, and it was not to produce a secular paradise. It was to bear the brokenness of his and every human society.

His next appearance will, instead, mark the end of history as we know it. His coming will not mean a perfect socialist or capitalist world, for whatever world exists at that final moment in time will pass away in the face of the “New Heaven and New Earth” of which Isaiah and Revelation speak. The world we inhabit with all its beauty, glory, uncertainty and violence must pass away when the one who can meet our deepest desires, the Desire of Nations, finally arrives.

Conclusion: The Need for a Politics of Humility

Although a great deal of 2020 was spent in looking at great thinkers of history, it began with a look at a few of my favorite thinkers and their meaning for political thought. The most important of these insights is that the Christian passion for the coming of a New Heaven and New Earth, for the coming of a Righteous King and an end to the wars, poverty, oppression, and the like represented the deepest moral passions of the human race, when cut off from faith that endures and transforms the pain and brokenness of human history with hope and love, results in a moral passion cut off from the roots of morality itself, a passion capable of great evil, as we have seen repeatedly in the 20th Century.

What can be achieved within history is what I would call a humble politics of wisdom and love, of nurturing slow organic change; of eliminating evils gently, even when working with diligence and speed; of patiently working to end poverty and war and all the other scourges of the human race with a wise understanding that we will ultimately fail, because the creation of a perfect world is a task too great for our limited human moral and spiritual abilities. “The poor will always be with us” and “Only the dead will never now war again.” This is the tragedy of history.

I hope by the end of next year we will all recognize that the Romantic hope of a perfect world within history that gave us the French Revolution, the Russian Revolution, the Communist Chinese Revolution and numerous bad policy decisions in the Western Democracies was based upon a harmful delusion concerning the possibilities and potentials of secular politics. What is needed is not a continuation of the Nietzschean, Marxist, or Laisse Faire Capitalist ideal, but something new and different. When we finally end the period of decadent, Hyper-Modernity we are in, there is hope for a more human future.

Jesus and the Apostles urged us to not look at the worldly wise or the worldly powerful for our salvation. Instead, as we celebrate this week, they suggested that we look at a baby born in a manger and at a broken body nailed to a cross. We do not want to think that our true hope lies in a poor helpless baby in a manger or a dying man, but paradoxically, this is our best and only hope. 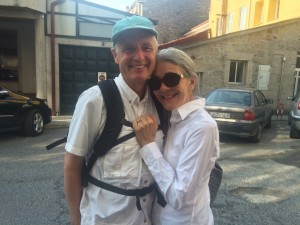