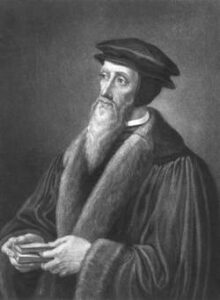 The last blog introduced Calvin as a political thinker and dealt with the powers and responsibilities of the magistrate in public life. For Calvin, the magistrate is the embodiment of the laws of a polity, and is the active element that ensures its active success (4.20.14). [1] If the magistrate is the embodiment of a polity, its laws are the sinews, the glue that holds a political unit together. Magistrates have a duty to enact just laws, and citizens a duty of obedience to those laws, even laws with which they disagree or which are imposed by rulers who act in an immoral and oppressive way. For Calvin, only when laws and rulers interfere with the worship and obedience that Christians owe God does a limited right of passive resistance apply. The duty of obedience and the right of resistance will be dealt with next week. This week, we look at Calvin and the laws of a society. In my view, this is one of the most important blogs I have done because of the essentially relational view of law Calvin takes.

Distinguishing Between Ceremonial, Judicial, and Moral Laws of Israel

In Calvin’s day, as in our own, there were those who believed that the laws of the state ought to mirror the laws instituted by Moses, a view that Calvin regards as false and foolish (4.20.14). In responding to this error, Calvin begins his analysis of law with the commonly recognized distinction between (i) the ceremonial laws of Israel, (ii) its judicial laws, and (iii) the moral law found in the Old and New Testaments. These three aspects of Old Testament law must be carefully distinguished and are differing importance to those interested in human social life.

The ceremonial law was enacted to create a holy and set-apart people of God. The people of Israel were chosen by God to be different from the surrounding nations. From a Christian perspective, this separation was for the tutelage of the Jewish people as they prepared for the Messiah. The ceremonial law contained the outline of a religious system, involving festivals, and a sacrificial system, appropriate for a stage in human development when sacrifices to the gods was commonly practiced. This ceremonial law was an important preparation for the revelation of Christ, but could be and has been abrogated without loss.

The moral law stands upon another footing and cannot be abrogated by human beings. The moral law is founded upon the rational nature of human beings created in the image of God and summarized by the Great Commandment, which is given in Mark in the following way:

This commandment of love stands at the root of the moral law and is a perpetual “natural” law designed to provide a structure for all of human life (4.20.15). In the language I have been using in these blogs, the moral law, which is an outgrowth of the law of love, is founded upon the self-giving love and relational wholeness that exists within the Trinity and which is embedded in the nature of creation as a relational whole. We give the name “love” to this relational wholeness that leads to peace (shalom) and human thriving. [3] The object of this moral law is to enable human beings to navigate life successfully.

In this view, which I term “Sophio-Agapic,” natural law derives from the hidden wisdom through which God created the world and the self-giving love by which God creates and sustains the universe. Because God is wise, there is embedded in God’s creation an order. Because God is essentially relational, the universe reflects at every level a relationality that is foundational and which is reflected in the human capacity for love. [4] Implicit in the kind of wise relationality that underlies human society is the notion that humans must have both order and freedom to thrive. It is the search for wise relationships that drives human beings to create systems of law to ensure public peace and order, and it is the desire for loving relationships that drive human beings to freedom-in-relationship. This sophio-agapic relationality is the foundation of what we term “natural law.”

It is important to reflect upon the difference that a relational, sophio-agapic theory of natural law makes to morality and law. Often, natural law theorists focus upon the moral content of natural law (murder is wrong) without proper consideration of the relational foundation of that rule in the desire for human harmony and peace (murder is antithetical to human striving and shalom). A focus on the relational foundation of law in love allows a recognition that all law, including moral law, rests upon something deeper than law itself—on the love and wholeness for which human beings were created. This is an important insight for our society in order for it to exit the period of decay and polarization in which we find ourselves.

The moral or natural law is not sufficient to organize any particular society. For there to be social order, there must be a system of public law. The specific laws of Israel were given to them so that they could live together peacefully under the conditions of the ancient world in which they lived. Once again, the judicial law of Israel was not eternal and could be abrogated in order to accommodate a different people and culture (4.20.15). Thus, the specifics of the judicial law of Israel are not binding upon other societies and may be changed to meet different social circumstances as human history unfolds.

Thus, the result of a proper understanding the differences in the ceremonial, moral, and judicial law of Israel is that the nations of the world are free to craft their own laws so long as they are respectful of the law of love that stands beneath and is the foundation of all law. Thus, “…every nation is left free to make such laws as it foresees to be profitable to itself. Yet, these must be in conformity to that perpetual law of love, so that they indeed vary in form by have the same purpose” (4.20.15, emphasis added). This standard of love means that barbarous laws that would give honor to thieves, justify murder, or permit savagery are to be condemned. [5] All laws have as their purpose the creation of a just and loving social order.

Because laws are intended to create and maintain the relational wholeness of a particular society, Calvin sees equity, that is the giving of each person and group his or her due, as the foundational way in which love is worked out in any concrete set of laws. Thus, the law of love is the foundation of “natural law,” which is the moral law of God and is engraved on the human conscience (4.20.16). [6] This does not require that modern people believe that every single insight of the ancients as to the nature and character of the natural, moral law were in fact correct.

Any law framed so as to create equity is to be approved of irrespective of whether it differs from Jewish public law. This is an important insight, for it allows a progressive understanding of human law throughout human history and the accommodation of the laws of a society to the circumstances of that particular society.

For example, Calvin notes that, even where societies universally condemn an action, such as stealing, there can be differing penalties for the violation of that law, and the Old Testament penalties are not binding upon any particular society. Thus, some societies treat various crimes more or less seriously and throughout history differing penalties have been thought just for the same crime. This is to be seen as an accommodation of a particular society to its own circumstances (4.20.16).

This view leaves human actors with space within which to adapt their society’s laws to specific economic, geographic, cultural, and other circumstances which differ from time to time and place to place. For Calvin, society is not an entity decreed to have only one set of laws based upon one culture’s reading of the Bible, the revelation of God, and circumstances. Instead, different societies are free to experiment and to create their own laws, subject always to the kind of relational wholeness that would be called “equity” that results in social peace.

To say that societies are free to experiment is not to say that there are no guiding principles to be followed in the search for equity. For example, laws that would be destructive of social peace, of equity among citizens, of the family upon which society rests, of the ability of people to have productive work and earn a living, etc. would all be suspect from this perspective. Underneath all of the possible guiding principles, there is one supreme guiding principle, the law of love, and any law that ignores this guiding principle is suspect.

I have found Calvin’s insights not only consistent with an older, organic view of society and law, but also consistent with a constructive post-modern view of human nature and society as rationally evolving in accordance with a deep desire for community built into both the universe and human nature itself. This evolution means that each society must adapt and construct itself, hopefully adapting to new conditions under the constraints of the “Law of Love” that sits at the foundation of all human community, from the nuclear family to the modern state.

Every society of whatever kind or nature has a status quo and a set of social relationships that have evolved over time. In enacting new laws, leaders have a need to respect the existing set of social relationships and gradually make changes. This principle of gradual change is important in maintaining the legitimacy of governments and the social support any government needs to survive. One of the unfortunate consequences of the American preoccupation with “nation building” in the Middle East has been a set of policies that initially ignored the existing fundamentally tribal nature of the societies in question. In any situation, there are limits to productive change, however valuable it might be over the long run.

I invite readers to consider whether or not some of the problems of our society stem from the loss of a sense of community bound together by a kind of social love that seeks equity for all citizens, whether of our particular party, race, sex, or social group. In addition, I invite readers to consider whether the difficulty we have in maintaining true freedom of expression and development of people and groups is not related to a distinctly modern notion that “might makes right” and that history is merely the unfolding of the search of social groups for power. If love sits at the foundation of society, then this view is surely incorrect.

[1] Calvin, John. Institutes of the Christian Religion Volumes 1 & 2, ed. John McNeill. trans. Ford Lewis Battles (Philadelphia, PA: Westminster Press, 1960). All quotations are from this version of the Institutes in the form: book.chapter.section).

[4] See, John Zizioulas, Being as Communion (Crestwood, NY: SVS Press, 1985) for an orthodox look at relationality as constitutive of persons.

[5] This is an area within which Christians and non-Christians may see substantial disagreement. For Calvin, laws protecting marriage, etc. reflect the law of love. One might presume that laws forbidding practices like abortion might have been included in this catalogue of laws that violate the command of love. While not minimizing the extent of debate about this foundation of law in love, I think that Calvin has made a valuable contribution to public debate by considering that all laws should work to cement the social bonds of a society in relational wholeness and peace.

[6]  I term use the term “Sophio-Agapic,” to describe that relational wholeness that finds its completion in God and in the transcendent justice towards which human beings strive. As indicated in the main text, this “sophio-agapic” relationality is the foundation of what we term “natural law.” Sophia refers to the wisdom of God, and agape to the self-giving love of God.