For freedom Christ has set us free; stand firm therefore, and do not submit again to a yoke of slavery (Galatians 5:1).

For many years, the Wall Street Journal reprinted an editorial written by Vermont Royster in 1949 as its Christmas Eve message. The title was “In Hoc Anno Domini” (“In this Year of our Lord”). [1] It is probably the most famous editorial ever written by a journalist. At the time the editorial was written, the Soviet Union was spreading Marxism throughout Eastern Europe and the world, bringing tyranny wherever it gained power. This ideology was often seen by Western elites as fundamentally outlining the inevitable future of human social organization. Many educated people silently believed in the eventual defeat of the West and an inevitable victory of some form of the “dictatorship of the proletariat” that Marx, Lenin and Stalin promised—with the loss of economic and other freedoms that victory would entail.

For those who believed in freedom and other historic ideals of the West, the outlook appeared bleak. It seemed an invisible “Iron Curtain” was falling upon the West as surely a material wall would be built between East and West Germany. [2] In Fulton Missouri, three years earlier Winston Churchill raised a solemn warning in a speech known for the phrase “Iron Curtain”. [3] He said:

“We cannot be blind to the fact that the liberties enjoyed by individual citizens throughout the British Empire are not valid in a considerable number of countries, some of which are very powerful. In these states control is enforced upon the common people by various kinds of all-embracing police governments. The power of the state is exercised without restraint, either by dictators or by compact oligarchies operating through a privileged party and a political police.”

His warning has meaning in every age, including our own.

In this situation, Vermont Royster wrote his 1949 Christmas message, which ended with the verse I chose to guide this week’s meditation. The article was a meditation on the roots and meaning of freedom for Western society. Royster began by describing the situation into which Christ was born. Freedom, for the average person, was a distant dream. Most of human history, and especially Jewish history, involved a series of enslavements by conquerors, Egyptian, Assyrian, Babylonian, Median, Persian, Greek, and finally Roman. The Roman Empire was as violent a regime as existed before or since—given its technology as oppressive as totalitarian states of today. Narrow elites governed cold-bloodedly. There was darkness on the face of the earth, and fallen “Powers and Principalities” ruthlessly reigned through their equally fallen earthly embodiments (Ephesians 6:12). 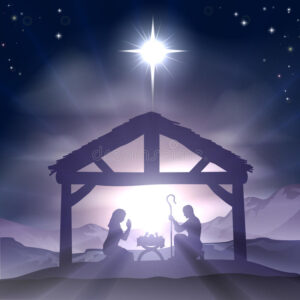 In the First Year of our Lord

Then, one night (we know not when, but celebrate the birth on Christmas Day), an unwed mother gave birth to a baby, who cried his first cry and was placed in a manger (Luke 2:6-7). No one in Rome or Jerusalem, or any other place of power, noticed or gave the slightest attention to the birth or the first solitary cry of the baby born that night. The child grew up in absolute anonymity at the fringe of the Roman Empire. About the age of thirty, he had a short public ministry until the powers and principalities rose up and had him killed. His death by crucifixion also went unnoticed, though the Roman Centurion assigned to the execution reflected that that he “surely was the Son of God” (Mark 15:39).

Everyone in power expected things to go back to normal, and for a long while as history unfolded, it seemed they were right. However, Love and Wisdom had come to dwell on earth in the person of that Babe of Bethlehem and begun a slow, patient, self-giving, and often sacrificial struggle for a place in every human heart. Where that Wisdom and Love grew, truth, goodness, beauty, justice, freedom, and true community slowly grew as well.

The disciples of the Man from Nazareth, declared that death could not and did not hold their teacher. They spread out into the known world to share the message that a personal Word of Grace and Truth had come and dwelt upon the earth with wisdom and love—albeit a wisdom and love the powers and principalities easily ignored. Most people disregarded the message, as did many who heard the message first-hand. However, the message had a mysterious power behind it. Men and women changed as they came into contact with the Babe.

The mysterious wisdom of God, what Apostle Paul declared to be “foolish to the Gentiles” (I Corinthians 1:23), had begun a slow march through history among those who responded. The love of the Man of Sorrows had a power to change hearts. Wherever the message gained traction, it slowly created a future of hope, justice, freedom, justice, and peace. People, families, towns and eventually an empire were changed. A kingdom of wisdom and love slowly formed in history and outlived the Roman Empire and many empires since.

We are near the end of this “Year of Our Lord” 2021. The powers and principalities are on the loose, as always. Forces of darkness always seem to have grabbed a march on the forces of light in human history. Wisdom seems a powerless thing in the face of shrewdness and deceit. Love appears weak in the face of social, military and political power. However, for those who gaze at the manger and see a light the world cannot see, victory has already come “In Hoc Anno Domini.” The powers and principalities will not finally or forever withstand the Newborn King and his kingdom of love and light.

[2] By 1948, the Russians had determined to drive the Western powers out of Berlin. The blockade of the West occurred prior to Royster’s message and was over by Christmas 1949. The wall itself was not built until 1961, and was finally torn down in 1989. See, Berlin Wall History.Com at https://www.history.com/topics/cold-war/berlin-wall (downloaded December 22, 2021.

[3] Winston S. Churchill, “The Sinews of Peace” (Westminster College, Fulton, Missouri, March 5, 1946). This speech is popularly known as the Iron Curtain Speech. I have made minor typographical corrections for readers of the text. Churchhill wrote “The Sinews of Peace” as a speech with conventions that appropriate to that genre.